Family history is an adventure and this blog is a way to record my notes and share my discoveries. If you have any additional information, corrections, or have pieces of family history you wish to share, please contact me.

The images on this website are created for display on this website, however if one of your ancestors has been featured here, please contact me for a higher-resolution image. I’m happy to share as long as I have permission to do so.

Unauthorized use and/or duplication of this material without express and written permission is strictly prohibited. Feel free to use excerpts and links, but please provide full and clear credit to Chriss Coleman and Curating with link backs to the original content.

All content provided on this site is for informational purposes only. This site contains no affiliate links, I receive no free product, and this site is not monetised in any way. Any links to products and websites are available for convenience and because I like or use the product. All opinions are my own.

Curating Kin makes no representations as to accuracy, completeness, currentness, suitability, or validity of any information on this site and will not be liable for any errors or omissions in this information or any losses, injuries, or damages arising from its display or use. The information posted on this site is based on my own research to date and is liable to change as new information is discovered. All information is provided on an as-is basis. 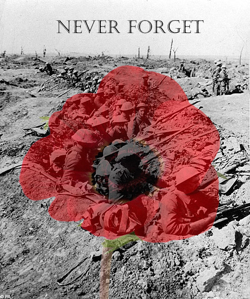 This Remembrance Day, we pay tribute to the 100th anniversary year of beginning of the First World War. As such, I wanted to take the time to honour a member of our family, one of many, who served in the conflicts of the Great War.

Herbert L. Walsh, a young electrician from Niagara-on-the-Lake, Ontario, Canada, attested on the 28th of July 1916 at the nearby town of St Catharines to be part of the Overseas Canadian Expeditionary Force. He was a small lad, just shy of 5’5” tall with blue eyes and a fair complexion.1 He wanted to serve his country.

He was assigned to the 71st Battery, but was later transferred to the 11th Battery in the 3rd Brigade. On the 21st of October 1916, his unit left Petawawa, Ontario on a train for Nova Scotia, where he set sail for Liverpool, England arriving on the 5th of November.2

The weeks that followed saw parades, inspections, drills, and day marches varying from 15 to 25 miles. Herbert learned a variety of new skills whilst training in England, from musketry and gunnery classes, to peeling a “dixie of potatoes”.3

He awoke at 2 a.m. on the 19th of January 1917 to go to France, leaving camp at 3:30am for Southampton, where they sailed for Lowe, France. He would be part of a battle that would become a defining moment in Canadian History. Four divisions of the Canadian Corp were brought together in an attempt to take Vimy Ridge. The Vimy Ridge was a 7km fortified section of landscape situated in Northern France. Previous British and French attacks on the site ended with hundreds of thousands of casualties and little gain.4

There were extensive preparations made before the attack, and the Canadians went through rigorous training. The weeks that preceded the battle saw the men out on working parties, preparing for the fight that was to come.

In the early morning of Easter Monday, the 9th of April, 1917, Herbert was part of the Canadian Corps that fought the German Sixth Army at the Battle of Vimy Ridge. The battle lasted four days until the Germans retreated to the Oppy-Mericourt line. 100,000 Canadians fought the battle, and of them there were over 10,000 casualties, nearly 3,600 of them fatal.6

The fighting was brutal, and stretcher-bearers worked feverishly in an attempt to remove the wounded solders from the battle fields. Herbert and his friend Brown were knocked out by a gas shell at 9:30am. They were picked up and carried to the light railway, and from there to Mourville to the clearing stations where their wounds were dressed. Herbert recounts sleeping on a stretcher with one shoe on and one shoe off. The results of the gas shell left him with a fractured left leg, the middle finger of his left hand shattered, and shrapnel in both arms and left eye.7

He was sent back to England to recover from his wounds. His injuries resulted in him losing his eye, and he would have stiffness in his hand and leg. A little over a year later, he was discharged at Toronto, Ontario, Canada, on the 28th of April, 1918.

We are thankful he returned home. So many young men and women made the ultimate sacrifice. Please take a moment to remember those who have served in all the various conflicts and the sacrifices they made.

Herbert Lawrence Walsh is my husband’s great-grandfather. Our ancestral line: